TORONTO — The St. Patrick’s Day Parade Society of Toronto is pleased to announce Michael McCormack as Grand Marshal for the 30th anniversary of the St. Patrick’s Day parade in Toronto on March 19, 2017. The McCormack family has played a pivotal role in supporting the St. Patrick’s Day parade in its modern day incarnation, as Michael’s father, former Toronto police chief William McCormack, helped revive the parade in Toronto in 1987 following a hiatus. Sadly, he passed away last year, but his legacy, both as a ‘policing legend’ and a leader of the Irish community, lives on in one of the biggest annual civic events to occur in Canada. 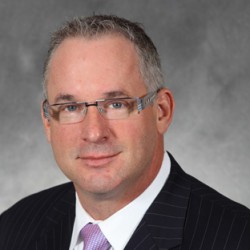 Michael McCormack is an active member of the Toronto community, acting as a police officer in the Cabbagetown-Regent Park areas, and president of the Toronto Police Association since 2009. Michael has director experience with investments funds and associations having served on several boards including Covington Fund II Inc., the Police Association of Ontario, and the Canadian Police Association. He has been an organizer for groups such as PEACE (Police Enabling Action through Community Education), Building Bridges and Pathways to Education with a focus on assisting youth in at-risk communities. As Grand Marshal, Michael continues the McCormack family’s dedication to both Toronto and Canada’s Irish community through which William’s spirit will live on.

This year, the St. Patrick’s Day Parade Society celebrates both the 30th anniversary of the parade and Canada’s 150th anniversary, commemorated in this year’s shamrock-maple leaf hybrid logo. The organization invites the people of Toronto to join the celebration on March 19, 2017, for one of Canada’s largest Irish events.

The St. Patrick’s Parade Society are the custodians of a tradition to celebrate Ireland’s history, culture and heritage in Canada through entertainment. It is a not for profit event staging organization responsible for The Grand Marshal Ball and The St Patrick’s Day parade.